Home »An Addict Within Blog»Daytona 500 Enabling the Addict

One of America’s largest sports is NASCAR. I have only seen one race and although not an avid fan of racing, as I watched it I thought how exciting it would be driving in a car as a passenger at  200 plus mph, bumper to bumper in a high tech machine. Physically being pushed and pushing other cars at these speeds would be an intense experience.  The excitement of the sound of the engines, the raw power would be awesome and virile in nature. The danger and the adrenaline rush would be amazing,

It struck me that I was  already doing that.  I have been on an 8 year journey with my addict. As she drove the car bumping into other cars on the track, I was in the passenger seat trying to make sure she was ok and everything will be alright as I was holding on for dear life. Giving directions and instructions that she would not listen to!

Wasn’t that what I was supposed to do as a good father?

The problem was I didn’t have the steering wheel, my addict did! How did I expect to fix all of this when I wasn’t driving? I was simply on the journey with HER. Chasing my addict trying to fix her. I was driving around HER track, in HER life, in HER car at 200MPH  being bounced around by HER being in control of the car. All the time I was trying to get control and fix HER problem when SHE was driving.

Only when I got out of the car and sat in the stands as a spectator and watched, did I realize that I was as out of control trying to fix her, just as she was using drugs!

I no longer get in the car and ride with her as it just did not work. I now sit in the stands and as she drives around her track of life, I get an occasional glimpse of what is going on just …like watching car race. I am there when she is ready for help.

Only when I stepped out of the car did I get my life back.

This site uses Akismet to reduce spam. Learn how your comment data is processed.

Buy “An Addict Within” At The Fine Retailers Below: 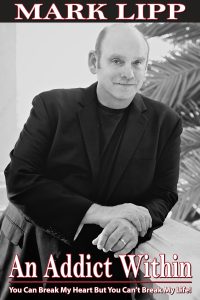